We use cookies to give you the best possible experience on our site. By continuing to use the site you agree to our use of cookies.

Back in January we ran a competition to design a flag for VE Day.

The winning entry was designed by Cdt. Hayley Poole from 1414 (Crowborough) Sqn RAFAC

She did such a fantastic job - we asked her to design another for VJ Day - and this is it.

Hayley wrote " I have included the Allies (Soviet Union, America, United Kingdom and France) within the letters V and J. In the centre of the design I have also included a circle with the number 75, representing the 75th anniversary, on top of the WW2 Japanese flag Jyūrokujō-Kyokujitsu-ki. Underneath this, there is the date of the surrender (15th August 1945). Furthermore, there is also the silhouette of the USS Missouri (BB-63) in the background as this was the site in which the empire of Japan officially surrendered."

It is VITAL that we encourage today's youth to remember such an important part of our History ad keep these acts of Remembrance going so we hope you will support this design and purchase a flag for your VJ Celebrations. 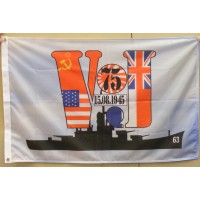 Back in January we ran a competition to design a flag for VE Day. The winning entry was designed by ..